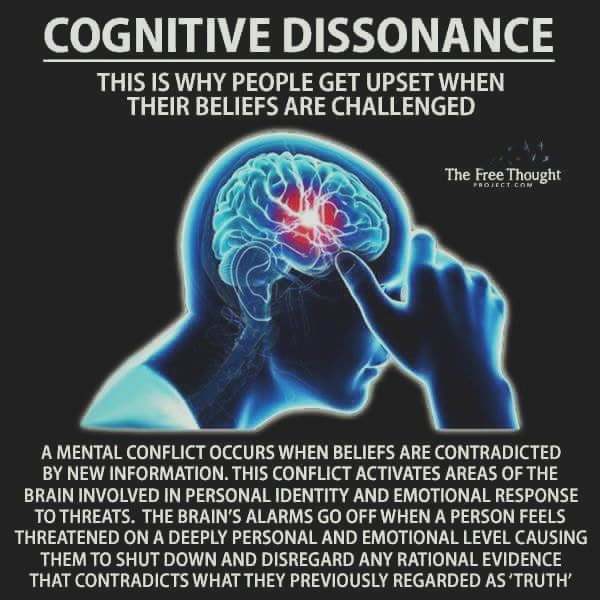 Back to Rabbit Holes (A-Z)

Cognitive Dissonance (CD) is a concept that was developed in 1957 by social psychologist Leon Festinger, who is famous for saying “Most people have a tendency to make their thoughts consistent”.

It refers to an individual’s motivation to reduce the uncomfortable feeling they get (dissonance) caused by two inconsistent thoughts.  In order to alleviate this discomfort, we engage in a variety of actions to reduce it.

For example, an overweight person believes eating cookies is not healthy, yet can’t resist eating them if offered.  The discrepancy between attitude and behaviour creates discomfort.  To reduce this dissonance, the person must either stop eating cookies or change their attitude.  “Just one cookie won’t hurt” and “I’ll start my diet tomorrow” are dissonance-reducing attitudes.  Cognitive dissonance is about trying to reduce the tension by cognitively justifying unpleasant things.  If we are aware of cognitively inconsistent elements, our degree of discomfort can be reduced by using this automatic mental strategy.

We justify the negative things we do in life because we need to convince ourselves that we are decent, reasonable human beings.  For example, if we have had a bad argument with someone, we often develop a negative perception of that person, which justifies our poor behavior towards them.  We also have a strong need to justify the effort we put forth in life.  We positively evaluate goals that require considerable effort.  Whether we reach the goals or not, we must justify the effort we put into trying to reach that goal.  The reasoning goes like this: if we work hard to attain a goal but then evaluate that goal in a negative way, dissonance occurs and we would have no motivation to accomplish what we set out to do.  If we put forth considerable effort, yet still do not reach the goal, we would again feel dissonance and the need to reduce it.  By convincing ourselves that we did not work as hard as we actually did, or we could say that the goal was not all that important in the first place we can justify and reconcile in our minds, the time and effort we exerted in pursuit of it.

CD theory argues that individuals will also avoid information inconsistent with their views altogether, because of their natural proclivity to avoid discomfort.  However, researchers have found that people will avoid unpleasant information only if (1) they think they cannot refute the uncomfortable argument, and (2) they are irrevocably committed to their way of thinking or behaving.

Our most intense justifications of our actions take place when our self-esteem is involved.  If you act in a cruel way towards someone, then it follows that you have to perform some mental gymnastics to keep yourself from thinking you are a cruel person.  The clearest results in the hundreds of research studies on cognitive dissonance occur when self-esteem is involved, and it is when individuals with the highest self-esteem act in cruel ways that the most dissonance results.  In contrast, people with low self-esteem who believe themselves already to be a loser, pathetic, needy, etc. may actually engage in poor behaviour deliberately to keep their dissonance and a minimum.  It works both ways and can manifest itself as a self-fulfilling prophecy.

So what type of person are you? The fact that you are here reading this tells me that you are a person well-equipped to bravely face the Dark Night of the Soul and willing to consider changing the way you think.

The key is to learn how to avoid this auto-pilot defense mechanism that the brain employs to maintain the status quo, and override the system so that you can progress and evolve or take appropriate action in a specified situation.  To overcome this dissonance-reducing behaviour one must either change their thoughts or their actions.  Here’s how to do that:

In regards to research and learning new information that contradicts what you already know or have never heard before, you are going to have to be willing to eventually change your thoughts on some things if you want the dissonance to subside.  A popular way of describing this process is from the movie The Matrix.  You either take the ‘blue pill’ (your thoughts and behaviours stay the same and you carry on living as you always were activating dissonance-reducing strategies) or, you take the ‘red pill’ and allow your thoughts and/or behaviour to be changed.  The choice is always yours.