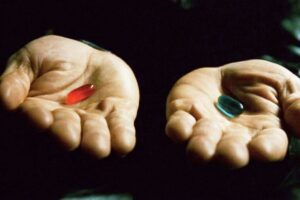 Morpheus offers Neo a choice. Holding out his hands, he presents Neo with two pills, one red, and one blue. Morpheus explains to Neo, that should he take the blue pill, his life will remain as it is. Should he take the red pill, he will be guided down a rabbit hole of awakening. After this awakening, Neo will never be able to return to life as he knows it. However, taking the red pill will also reveal the truth: that he has been living in a carefully designed construct, created to keep him a subservient slave, to a self-serving machine. This construct is “The Matrix”.

In these times, we are now being afforded the same opportunity, as was given Neo. Before us, the out stretched hands of providence, are presenting a red pill and a blue pill. These pills are coming to us, in the form of two, often contradictory, streams of information.

It is up to each of us, to listen carefully to the voice of our inner being. We as individuals, must seek this counsel, before making a decision.

When deciding whether to take the red pill or the blue pill, may we all be sure, our choice is being made, not under any external duress, but under the influence of a deep desire for truth. We must make the choice, that most strongly supports, the sense of our own sovereignty.

Presented now, is information that may help with this very important decision.

How To Build A Matrix

A group of people united in some close design, usually to promote their private views or interests in ideology, state, or other community, often by intrigue, and unbeknownst to those outside of their group. – Wikipedia

An individual, or group of individuals, who seek complete power and control over the population: this for their own benefit and aggrandizement, and behind the guise of working together, for the greater good of all.

“…and for the international order, that we have worked for generations to build. Ordinary men and women, are too small minded to govern their own affairs. That order and progress can only come when individuals surrender their rights, to an all powerful sovereign.”

A term coined by writers Edward S. Herman, and Noam Chomsky, in their 1988 book entitled, “Manufacturing Consent: The Political Economy of the Mass Media.

Mainstream mass media, including news networks, print, television, cinema, and the music industry, are utilized by those in power, to sensitize the population towards certain issues, and desensitize the population away from other issues. The purpose and intention of manipulating the population in this way, is to massage that population, into believing, they are freely choosing to agree with, and consent to, certain prdetermined perspectives, that have already been chosen for them. In actuality, the consent of the population, has been molded for them, by the mass media’s influence. By repeated directing of focus and attention, on specific issues, the population is lulled into consent, by virtue of the absence of any other perspectives. By exposure to repeated, selective, and limited information, the population accepts and submits, to a manufactured interpretation of reality. The population then agrees, with the efficacy of this manufactured reality. By agreeing that this reality is valid, the population consents to its rightful existence. Hence: Manufactured Consent.

Examples of sensitization. Consider the number of news, cinematic, and television offerings, which have focused on topics such as outbreaks, plagues, pandemics, and viruses, during the last decade.

Examples of desensitization. Consider the number of news, cinematic, and television offerings, which have focused on black opps, psy opps, espionage, government conspiracies, and alien conspiracies, during the last decade.

There are four levels of influence. They are: persuasion, manipulation, coercion, and subterfuge.

Persuasion: To openly present an argument for the purpose of trying to change the mind of another.

Manipulation: To attempt to change the mind of another, by utilizing previously acquired information: e.g. desires and/or fears, to sway opinion. Also the use of guilting, shaming, and the eliciting of sympathy, to coax the wanted compliance.

Coercion: Forcing another to change their mind, by use of bribery, blackmail, and any other form of spiritual, mental, emotional or physical threat. Threat is applied, until submission is procured.

Subterfuge: A form of influence so subtle, the subject is completely unaware, they are being directed towards opinions and beliefs, that are not of their own choosing. The mechanism by which, a person is being so programmed, they believe the idea they are being impregnated with, is their own. This level of influence would be considered brainwashing, and mind control.

This phenomenon was first identified in a study done in 1977, at Villanova University and Temple University. The final paper was written by Lynn Hasher, David Goldstein, and Thomas Toppino. The phenomenon in this paper is described as such:

“The tendency to believe false information to be correct, after repeated exposure.”

“Repeat a lie often enough, and it becomes the truth.” – Joseph Goebbels

The chemical subjugation of the population, via the use of mind altering pharmaceuticals, and the availability of other drugs both legal and illegal. The fluoridation of water. The predominance of sugar, and genetically modified organisms in the food supply system. All these contributing to an increased difficulty, in the populations ability to maintain clarity of thought.

Giving one faction, a reason for cause of argument, against another faction. Left against right. Black against white. Woman against man. Atheist against believer. Gay against straight. And vice versa. In addition, such a severe imposition of political correctness, that it becomes virtually impossible to freely express, without anxiety and fear of inadvertently offending, thus inviting retribution.

Reducing sexuality to the level of entertainment, devoid of emotional content or meaning. Thus removing many, from the experience of intimate human connection, that both empowers and inspires, the population as individuals. Prevention of the population, from physical human contact. Thereby contributing to feelings of loneliness, isolation, diminished self-worth, depression and despair.

Restricting segments of the population, who practice various faiths, from being able to gather together, for the purpose of supporting one another, encouraging one another, and finding hope together, on their own chosen pathway of connection. The arrest and imprisonment, of individuals who practice certain faiths.

Implementing mandates that attack individuality, and reduce the populations freedom, to distinguish themselves from one another, as a group of unique, autonomous beings. Demoralizing the sense of the importance of the individual, by using laws, symbols, and apparatus, to create a feeling of indistinction, banal commonality, humiliation and subservience. The determination to disempower, by dissolving a strong sense of self-identity. e.g. Masks.

And so, these are the five basic and five supplementary components, that are implemented to build a Matrix. Censorship is used, to ensure that all ten components go unchallenged, and remain in tact.

Regardless of whether we choose the Red Pill or the Blue Pill, we are all now in this together. We are all currently, the very much intended collateral damage, of an agenda, that has been in the making for centuries.

We must all now stand together, if not in agreement, at least in support of one another. We must not make enemies of each other. A good job of this, has already been done for us.

This has become a solitary journey, in which each man and woman, must now navigate his or her own conscience, and consciousness, to discover the path that they must take. This is not an easy journey, and so even in that, we deserve to be advocates for one another.

No matter how divergent our paths may appear, we are all ultimately headed in the same direction: the transmutation of darkness into light, and the emergence of something greater then what has been. And so, all deserve honour and respect.

Time will continue, to march us forward, each of us towards our own individual, and collective realities. Those realities rest highly upon the things we choose to believe, and the decisions we make based on those beliefs.

The choice of either the Red Pill, or the Blue Pill, does not make the chooser of one, greater or lesser, then the chooser of the other. The choice will simply determine, the content and the quality, of the journey that is to be taken. We must decide whether it is the Red Pill, or the Blue Pill, that will afford ourselves, the journey that is most in alignment, with who it is that we truly are.

May all be blessed, with the great wisdom and insight necessary, for the making of this decision. May we all come into resonance, with the path that most closely synchronizes, to the pulsating of Source within us. Red Pill or Blue Pill, may we all find a deep, abiding, and sustaining faith, in that Source. For ultimately, that Source presides over all. For this reason, truth and well-being, will prevail…as it always has.