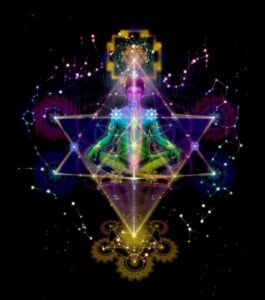 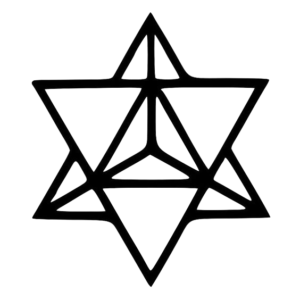 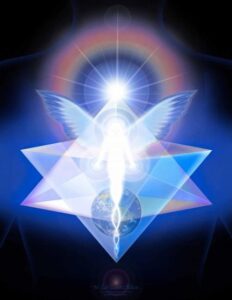 Merkabah or Merkaba (mer-KA-ba) symbolizes mind, SPIRIT, and body. This word can be split into three components for deeper translation:

Mer: ‘Mer’ refers to an energy sphere rotating that is the mental field within you and about you that forms your mental energy field.
Ka: ‘Ka’ represents one’s spiritual body’s field which is composed of two toroidial rotating energy fields around a person.
Bah: ‘Bah’ refers to the physical body field which is created by the energy fields creating torque on the central singularity pulling out the accretion disk of light, energy and matter that comprise the physical being.

What is the Merkabah:

According to the Wes Penre Papers – First Level, in physics, interaction between the simplest particles in the universe is the fundamental way of looking at things. The atoms in our bodies obey to these fundamental interactions, but the Information Cloud (what we usually call the spirit or soul) is not limited by them. It is this information cloud that is the real us; the bodies are only the vehicles which we need to be able to function in the physical universe (4-space/time). The body is just hosting the Information Cloud. However, contrary to some New Age ideas, the body is absolutely necessary for us to be able to have the appropriate experiences, and not something we should try to abandon in the process. It’s here, in the physical, that the “Game” is mainly being played out. Even when we get more evolved, we will need our bodies to travel in space and time.

Since ancient times the Information Cloud has been called by many names, such as “light body” and “Merkaba”, acting as a divine light vehicle, supposedly used by ascended masters to communicate with those who can tune in to these higher realms. In fact, according to the Life Physics Group, the Mer-Ka-Ba refers to the spirit/body surrounded by counter-rotating fields of light, which transfers the spirit-body (the biomind) from one dimension to another.  The rotating field unit can be described as an electromagnetic double cardioidal spin, or rotating magnetic field.

How To Activate the Merkabic field

The Merkabah can be ignited only through the envisioning meditation—accentuated and empowered greatly by the special exercises in this technique. These consist of—the Mool Mantra, Sun gazing included with chakra balancing and strengthening and the invocation that seals the field (stops beings from feeding off or draining a person’s energy fields). The full exercise also makes it so negative beings cannot pull a person out of or off their Divine path.
The Merkabah can aid a person in reaching new potentials in life as it powers the body, mind, and spirit to new experiences and aids in decalcifying the pineal. When the pineal (third eye) is decalcified it allows a person to see more accurately what is truly there; to see frequencies of light outside the frequency spectrum of the two frontal eyes and enables a person to easily learn remote viewing.
Matthew 6:22-23 King James Version (KJV) 22 The light of the body is the eye: if therefore thine eye be single, thy whole body shall be full of light. 23 But if thine eye be evil, thy whole body shall be full of darkness. If therefore the light that is in thee be darkness, how great is that darkness! The only single eye is the pineal which has rods & cones that are attached to visual cortex of the brain. Therefore if your pineal is evil (calcified) the light in you will
only be from the front 2 eyes and you will be in darkness but with the pineal (single eye) not calcified, the whole body will fill with the truth and light of The One True God of ALL creation and you see in truth!

During Merkabah meditation, the body doesn’t work alone—the entire being is involved at all levels, bodies, and energies. While the consciousness plays a critical role by visualizing the Merkabic fields while simultaneously running the Sat Nam (I am the truth that I am; in Sanskrit) mantra. The body is also powerfully involved through careful and correct circulation of the breath and position of the physical body components. Some, who have the ability to see auras or energy fields, can see the Merkabic field with the naked eye. Additionally, as the entire energy, sun-gazing, chakra balancing and invocation technique are practiced; along with the cleansing techniques for removing the calcification on the pineal gland; most if not all people can attain the ability to not only see the Merkabic field but have the ability to see much more completely in every way, while enhancing many other latent faculties.

The entire process of Merkabah meditation revolves around energy. The Merkabah has two electromagnetic fields that are interrelated to the Law of Gender. The Linear star-tetrahedronal field is the masculine and the outer Mer sphere field is the feminine. The Merkabic energy is a living energy field that can be guided through the feelings of the heart as guided by the consciousness. The Merkabic energy field is literally part of and connected to the energy structure of the entire space/time field and is literally created by the Word of the One True Creator of ALL creation. This word generates the light and energy of the eternal Merkabic field at all levels from the Planck distance to a person’s field to that of a star, a galaxy or the entire Universe. This energy by its very nature has the power to heal the mind, spirit and body. The correct balance of the Merkabic energy as well as practicing the Merkabic meditation can help a person to better understand themselves, the entire Universe and its creator. Additionally, a well-balanced and highly charged Merkabic energy field can enable a person to receive and transmit an expanded level of source energy vibrations.

Two interlaced and inter-reacting geometrically-shaped energy fields surround a person’s body. In fact, every living being in the universe has its own energy fields, including a Merkabic field. A Merkabic field is often referred to as the light spirit body and allows a person to travel to higher dimensions and ascend through life. The Merkabic field permanently surrounds a person’s six bodies and the spirit. It is the spirit that activates, energizes and motivates the six bodies.

The 6 bodies—the etheric body, (this body is the blueprint for the physical body); the physical body; astral body, dream body and the body that most remote viewers use, which is not entirely safe when being done with the astral body; the causal body (lesson or learning body); the mental body; and the soul body, the one eternal body and for the wise remote viewer, the one that is used due to the safety it affords. The relationship of these six bodies is represented by the sacred geometrical pattern known as the seed of life (see diagram below). This sacred geometrical pattern literally represents the understanding of creation found in so many sacred holy books including the bible. The central sphere of light (Creator) created by the first word or vibration then creates the remaining spheres in six days or times of creation. Since all beings are part of the sacred it is reflected in each and every one—reflected in each person’s the spirit and six bodies as previously explained. Additionally; advanced sun gazers often see this sacred shape in energy circles on the sun while sun gazing!

THE FLOWER OF LIFE 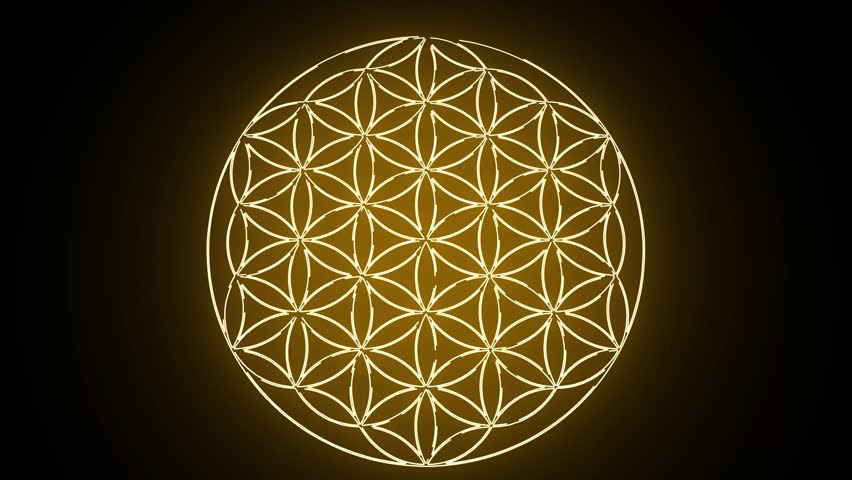 The Merkabic field connects, maintains and has complete unity and balance to all seven bodily chakras and the higher body chakras as well. In normal circumstances, the Merkabic field spins at a speed near that of light. The upper tetrahedron and toroid spin at 331 #3 revolutions per trillionth of a second and the lower tetrahedron and toroid spins at 112 #3 revolutions per trillionth of a second. This combined spin system, when not under negative influence is counter rotational (meaning the upper field spins in the opposite direction from the lower field). When